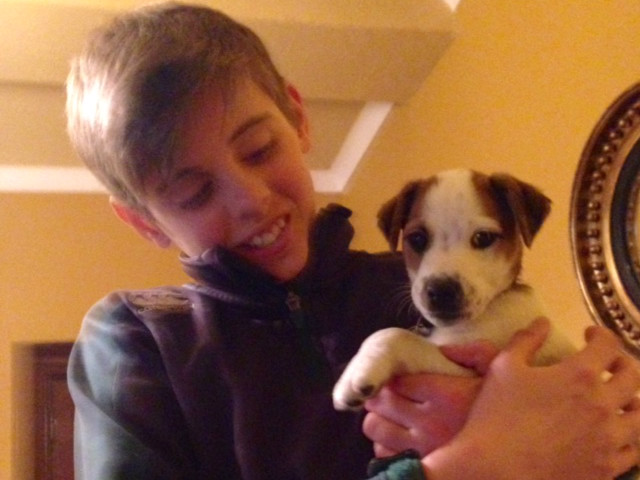 One thing we have plenty of here at the House of Mutt, is doggy company.  With bookings coming in up to ten months ahead of time and with a scribbled waiting list often seen snaking its way down the white board in the office, we’re guaranteed not to be dog-less any time soon.  So why, I wonder, have we seen fit to add A.N.Other to the Family Mountford in the form of a small, patched Jack Russell terrier, called Dude?!

The answer as Mr Paterson-Morgan so perspicaciously noted when he dropped his dog off with us the other day, is that my son asked ‘and what children ask, we generally do’.  Harsh to admit to being such a parental pushover, but the evidence would imply that it’s a fair cop.

Paddy’s argument was along the lines of the fact that he spends so much of his home time ‘doing’ dogs that it would be best if he had a dog of his own to ‘do’ at the same time.  Something to do with fully committing to the family business and all that.

He reasoned; his father said it was up to me; I capitulated.  Friends Nick and Sarah Payne came to stay for the weekend with their dog Hettie; Hettie was admired; Hettie had pups; the deal was sealed.

And Dude has now arrived.

I’m not sure yet whether he’s the luckiest pup in the country, or whether he’s going to be the pup at the bottom of the House of Mutt pile.  He seems pretty happy with his lot so far but time will tell!

I’ll chart his progress – steady or otherwise – scribbling here about milestones reached and lessons (hopefully) learnt along his House of Mutt way.

VIP checklist of what I was looking for in a pup:

And I took with me a crate with washable towel bedding and an old jumper and a ball (to wipe over Hettie before I left so her smell could reassure).