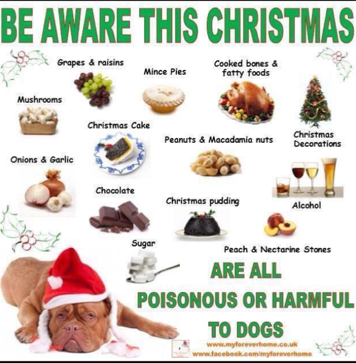 Papers are full of horror stories about the Christmas health hazards for dogs at this time of year  (ie Daily Mirror ‘More than 6,000 dogs are expected to have suffered chocolate posoning in 2016, a quarter of cases in December alone….‘).  No need to scaremonger, we are after all all grown ups and kind of understand it’s best not to feed dogs chocolate brandy ice-cream, but here are some thoughts from us here at the House of Mutt, and, below those, a good summary list from the British Veterinary Association.

Christmas Pudding, Christmas Cake, Mince Pies – yuk to all three from my point of view, but most dogs don’t agree.  They are unfortunately jam packed with raisins and sultanas (see above,re  grapes), booze and fat – none of which will do a dog any good.

Chocolate and liquorice – and remember the blooming chocolate decorations on the tree.  Soooooo tempting, so within reach if you just ….. lean …. as …. far… as you can…. (if you’re a whippet).  Or just  launch, of course  (if you’re a Labrador)

Tree decorations, even if they’re not chocolate.  The BVA reported 10% of dogs treated last Christmas for foreign body ingestion, were for Christmas decorations.  Not so good.

Bones.  Turkey bones left out on the sideboard, or put in the bin – ready for rediscovery by a hungry hound.  Boring, but true…

Nuts, in particular Macadamias.  I’m sure we’re not the only family who plonk a bowl of nuts on the sideboard at Christmas, for no real reason other than that that’s what mum did?!  Admittedly pretty tricky to get into but some dogs have tough teeth and a determined attitude…

Toys.  The BVA reports that last year almost one in five vets saw dogs that had eaten a non-edible gift given to them by their owner.

Plants such as poinsettia, holly and mistletoe.  Yet again, pretty tempting; very poisonous.

One vet reported treating a dog who had eaten ’200 pounds in 20 pound notes as well as most of the animals and baby Jesus out of the nativity stable.  He then ate a large chocolate Santa’.  Once at the vet, ‘he’ vomited most of the money, all the nativity players and the chocolate.  A neat summary of Christmas if ever I saw one!’

BVA Summary of substances which can be poisonous to dogs:

Substances with low toxicity that could cause drooling, vomiting or diarrhoea include